In the footsteps of the Dinosaurs

163 million years ago dinosaurs roamed our area. Forty dinosaur tracks were found at Ardley Fields Quarry in 1997 which are believed to show a nine metre long hunter killer Megalosaurus chasing a 10 ton Cetiosaurus running along what was then a sea coast.

Archaelogists speculate that there was substantial economic activity at Middleton Stoney before the mid second century and, with Alchester (near Wendlebury) being an important Roman settlement at the junction of two major roads, this is not surprising. Finds of flints and arrowheads indicate pre Roman habitation in the village, however, the first definitive proof of human settlement are the remains of two Roman farms, one dated to the late first/early second century and the other to the late second and third centuries.

With the departure of the Romans the area was almost certainly one of contention between the successive Celtic, Saxon and Viking kingdoms.

The first written documentation about the village, which was then known simply as Middleton, is in the Doomsday Book which tells us that in 1086: “Richard Poynant holds 10 hides in Middleton from the King. Land for 16 ploughs. Now in lordship 3 ploughs; 5 slaves. 25 villagers with 7 smallholders have 13 ploughs. Woodlands 8 Furlongs wide and as many wide. Value £10:’ 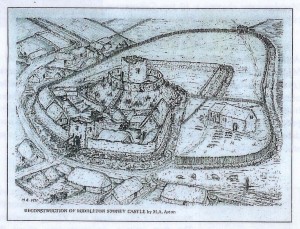 The earliest reference to the castle at Middleton Stoney is in 1194 but it was almost certainly built before this, possibly shortly after the Norman conquest. In the mid 12th century Middleton was in ther hands of Richard de Camville who was probably responsible for the construction of the motte and bailey structure. King John ordered its destruction in 1216 and it is unlikely that it was never refortified. A visiting historian described it in the early 16th century as ‘overgrowne with bushyes’ but ‘some peces of the walls of it yet apere.’

About 500 metres to the west of the castle was a deer park which was authorised by King John in 1201. He gave deer from Woodstock Park to stock it in 1203 and further gifts followed from Beckley Park and Wychwood Forest. The King‘s huntsmen were paid Lls and 8d for catching wolves in Middleton Park in 1295.

The boundaries of the Park still show as a bank and a ditch surrounding the present Middleton House and gardens.

Since the Hundred Rolls of 1279 refer to 14 burgage holders, 27 villeins and 4 freemen it is evident that a thriving village had grown up around the church and the old castle in this period. However, the population of Middleton Stoney appears to have been decimated by the Black Death 1348/9 destroying any possibility that it might develop into a market town. 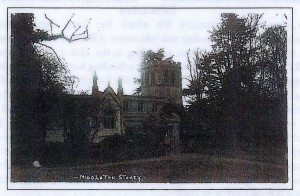 The earliest part of All Saints Church, the chancel and south doorway, dates from the mid 12th century and was possibly built at the same time as the castle. The south aisle was built in the 14th century and it was at this time that the ornate Norman door was moved to its present position. The existing chancel arch and the north aisle were built in the late 12th century thereby enlarging the nave. The early 13th century saw the addition of the west tower and the south aisle and its two arches were added early in the 14th century. The main part of the Church as we see it today was therefore complete by about 1320. This suggests that Middleton Stoney was a relatively prosperous community during the early Middle Ages.

The Jersey Family built the Jersey Chapel on the north side of the chancel in 1805. In 1856–8 the Church was extensively restored including rebuilding the tower completely. The restoration carefully followed the original design and re–used some of the old masonry.

The site of the original manor house is thought to have been built within the inner bailey of the castle, after the castle was destroyed. The first Middleton Park House was built within the area of the medieval deer park which had by this time, been landscaped. Fire destroyed this building and a ‘handsome brick structure’ was built in its place see photos below. This survived in a much altered form until 1938 when the 9th Earl of Jersey had it demolished and built a new house designed by Sir Edwin and Robert Lutyens. This, the current Middleton Park House, was one of the last country houses to be built as such in England.

One aspect of community life which has been comprehensively documented is the schooling and education. Although it is documented that the rector provided basic schooling in the 18th century it was not until the early 19th century that regular schooling became available in the village. By 1808, Sophia, Countess of the 8th Earl of Iersey had established three schools in the village. One school taught the ‘3 Rs’ to about 12 girls, another school taught reading and needlework to approximately 30 girls and the third school offered reading and net making to younger boys. In addition the rector taught the 3Rs to older boys in the evenings. The Jersey family remained closely involved in the schools even after education became the responsibility of the state. Dwindling pupil numbers resulted in the amalgamation and eventual closure of the schools, with the last, the infants school, closing in 1962.